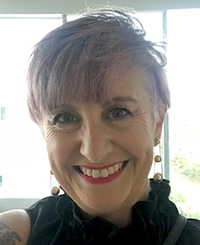 When Karen Lamble started having vaginal bleeding in her late 50s, her regular gynecologist, someone not at Overlake, didn’t seem interested in exploring what might be causing it. Instead, her gynecologist wanted to focus on potential post-menopausal causes. When Karen learned that this physician was leaving the clinic, a friend recommended a gynecologist who happened to be next door to Overlake.

After a thorough examination and a biopsy, her new provider broke the difficult news that Karen had cancer and referred her to an Overlake gynecologic oncology surgeon. “It turns out that I had an extremely rare form of cervical cancer,” says Karen. “There were only 40 other reported cases in the world.

From the start, Karen had trust in her Overlake surgeon. “I felt I couldn’t be getting better care.” The doctor explained that because of the rareness of the cancer, there were no protocols for treatment, so she would need to devise her own plan. “I trusted her to do that for me,” says Karen. “I saw that she was really paying attention to everything.”

The treatment plan started with six sessions of chemotherapy and four weeks of radiation at the Overlake Cancer Center. The goal was to shrink the cancerous tumor and increase the chances for a safe operation. “Both the chemo team and radiologists were fantastic,” says Karen.

The next step was targeted, internal radiation overseen by the Seattle Cancer Care Alliance, Overlake’s partner in cancer care. “I thought the people at SCCA were great,” remembers Karen. “You have to really develop a sense of trust because they are working in such a private part of your body. They are literally going inside of you.” Fortunately, says Karen, she was able to develop that trust and the internal radiation treatments proceeded without a hitch. They significantly reduced the size of her tumor.

Ten weeks after the radiation sessions ended, Karen had a radical hysterectomy. Everything seemed to be going well, but about 10 weeks into recovery, she started to bleed. That subsided and Karen was told to take it easy and come to the ER if it happened again. Two weeks later, she started hemorrhaging. It was late at night on a weekend when she got to the Overlake Emergency Room. An on-call surgeon came in to assess her and decided she needed emergency surgery.

Before the surgery, a physician’s assistant (PA) from her provider’s office arrived to give the on-call surgeon information on Karen’s condition and history. “It was so late, after 11 p.m., and I thought I was seeing an angel,” says Karen, recalling seeing the PA as she was being wheeled into the operating room. “I knew they were going to take care of me.”

And they did. The successful emergency operation was followed by two more surgeries that brought the bleeding under control and allowed her body to heal. Karen is doing well today and awaiting her first PET CT scan to ensure the tumor is gone. Karen says of the people who have cared for her at Overlake: “It’s a team. When there’s a problem, they come together to solve it. It’s what good healthcare should be: personal, caring and professional.”