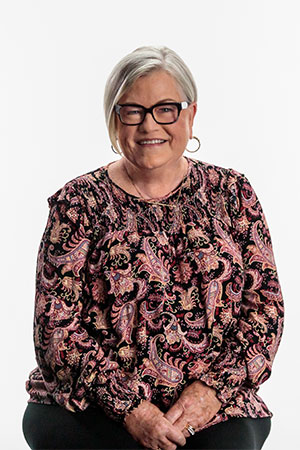 A blond woman with a light complexion, Sandy laughingly refers to her skin tone as “clear.” That’s how pale she is. As a baby boomer, Sandy began worshipping the sun in her teens, when sun tanning products were little more than accelerants.

“In those days, I didn’t think anything was wrong with covering myself with baby oil and lying out in the bright sun for hours. I wanted to be a bronzed beauty like my friends,” she laughs. In Sandy’s defense, there weren’t the warnings about skin cancer that there are today. And so, year after year, she continued trying to build the perfect tan.

“When I was much older, I would see spots on my face or chest,” she says. “I thought they were a normal part of aging.” She went to dermatology screenings at Overlake Clinics - Dermatology, where the spots were examined, but they were not cancerous.

Then, about six years ago, Sandy went to another skin cancer screening at Overlake. During the screening, she called attention to a spot on her cheek that she thought looked different from the rest. Her dermatologist examined it with a dermatoscope, a hand-held device that lights and magnifies an area so the doctor can see important details. What he saw concerned him. He recommended a biopsy.

“I told him to go for it,” Sandy recalls. “So he took a biopsy and it turned out to be melanoma.” Melanoma is a rare form of skin cancer that is more likely to spread to surrounding tissues and other parts of the body than other types of skin cancers.

“Thankfully, my melanoma was found early on and it wasn’t very deep,” Sandy says. “They were able to remove it and essentially save my life.”

Now, Sandy is screened for skin cancer every six months. “Since the melanoma, both basal cell and squamous cell carcinomas have been found, but because my screenings are so frequent, the cancers have been treated before they developed further.

“I can’t encourage people enough to get regular screenings for skin cancer,” she says. “Especially baby boomers like me. Screenings saved my life.”

When it comes to your health, knowledge is power. In order to understand your risk of developing cancer, it’s important to evaluate your risk factors and to make plans to manage any potential risks. Overlake offers genetic counseling and cancer screening tests. Learn more about Overlake's cancer care services here or call 833.766.5524.

Expertise and Empathy: Overlake Stands Out for a Patient Seeking Complex Heart Surgery

FLARE: 5 Ways to Help Someone Having a Seizure

Overlake Helps Volunteer Santa Slim Down for the New Year