With thousands of flavors available and multiple types of e-cigarette devices to choose from, vaping has become increasingly appealing over the last decade, especially among middle and high schoolers. The FDA, in fact, as a way to reduce vaping among American youth, may soon ban flavored e-cigarettes. We spoke with Overlake pulmonologist (doctor who specializes in lung diseases) Kim Truong, MD, to learn more about the health impacts of vaping.

What are the biggest risks of using e-cigarettes?

Nicotine addiction is one of the biggest risks. Nicotine causes fast heart rate, high blood pressure and worsens mood disorders such as anxiety. Another big risk is exposure to harmful chemicals including heavy metals like lead, volatile organic compounds such as known carcinogens including formaldehyde and others like diacetyl that have been associated with lung diseases. And then there’s the unknown; since vaping is relatively a new phenomenon, the long-term health effects are not yet clear.

Do all e-cigarettes contain nicotine?

Not all of them, but most do. Even the ones that claim they don’t have been found to contain it.

Is vaping safer than smoking?

While e-cigarettes contain fewer chemicals than regular cigarettes, they are not harmless and are not less addicting, especially if they have nicotine.

Something I really want to stress is although the vapor that’s inhaled and exhaled is odorless, it is not water vapor; it’s a mix of chemicals. These chemicals are not always labeled on packaging and vary widely from manufacturer to manufacturer. Therefore, we have don’t know all the potential side effects to the lungs. However, there are studies that have shown association of vaping with COPD, asthma and bronchitis.

Why is vaping so popular with kids?

There has been so much work done over the past few decades to change the public perception of smoking. Between 1965 and 2016, adult smoking rates dropped drastically from over 40% to 15.5%. But now, with vaping, smoking seems to be “cool” again. Teens overwhelming cite the appeal of vaping to the many tasteful flavors available. With misinformation out there that vaping is safer than regular cigarettes, it’s reinforcing that the behavior is okay. Also, surveys have shown that kids who have tried vaping are more likely to try cigarettes.

Would you advise a smoker to use e-cigarettes as a way to quit smoking?

It is not my first choice. I recommend FDA-approved nicotine replacement therapies. Their safety and efficacy have been tested and regulated. There are mixed results on the safety and effectiveness of using e-cigarettes as a tool for smoking cessation. Some of my patients have tried it and have been successful and others have gone back to smoking traditional cigarettes. 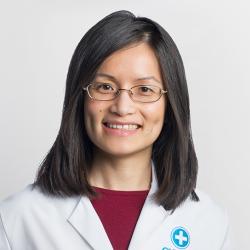 Kim-Thuy Trong, MD is a board certified pulmonologist at Overlake Clinics - Pulmonary Medicine.