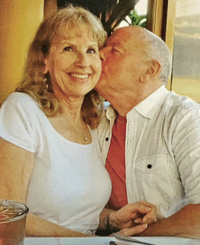 Tom Underhill, 75, of Bothell, owns a furniture company and was on a business trip when he suddenly fell ill. Testing revealed bile duct cancer, and after a recommendation of a highly skilled surgeon, he turned to Overlake. Here is his story.

Last spring, I was on a business trip in North Carolina and didn’t feel right after dinner. I went to my hotel room and began vomiting out of the blue. The next morning, I felt better and was able to make the flight home, but eight or nine days later, I had a repeat of the same symptoms. I went to see my general practitioner, and he started me on the path of getting tests done.

A battery of tests were performed, and cancer was found within my bile duct. The next step was, “What do we do about this?” The Whipple surgery was recommended. I was set up with an appointment with a surgeon downtown Seattle, but I wasn’t satisfied with their recommendations or how it was handled.

I got wind of Dr. Sung Cho through my business partner who knows a physician who recently retired from Overlake, and he highly recommended I call Dr. Cho.

I called him and instantly liked him. I liked what he had to say. Within almost 10 days, I was scheduled for surgery with Dr. Cho. My experience from that point on has been nothing but positive.

The Whipple procedure is a very extensive operation that requires an extremely skilled surgeon. In fact, it’s one of the most complicated surgeries a person can have in the abdomen. It was a 9.5 hour surgery where part of my stomach, part of my pancreas, my gallbladder, the first part of my small intestine and the whole bile duct were removed. Everything is rerouted and reattached, and your body has a new way of functioning for the rest of your life.

When Dr. Cho was done with the surgery, he said, “The surgery went well, and I did not see any spread outside the primary cancer. I took extra margins when I could to make extra sure I got the cancer.” He was quite positive I was going to have a good outcome, which was encouraging.

I expected, as a surgeon, Dr. Cho would come in once a day and check on me, but he was there twice a day—early in the morning and late in the afternoon—every day I was in the hospital, and I was there for two weeks. This was very comforting. A couple of times, I woke up in the middle of the night. I noticed a small light at the end of the bed. Someone was looking at my surgical drain bags. It was Dr. Cho with his flashlight staring for an extended amount of time at those bags, and he did that repeatedly. He really went over and above.

I then worked with my cancer team, oncologist Dr. Stephen Lemon and radiation oncologist Dr. Nicholas Serrano, to come up with a plan for my follow-up treatment after surgery. They had me rest for 2.5 months to give my body a chance to heal, then I started chemo (pills) and radiation simultaneously.

After surgery, I have felt well but have had some mild digestive issues. There are some medications you can take to help. My doctors have been working with that and trying different drugs and have been diligent in following up with me to get it right. I’ve also been working with a nutritionist, and Dr. Cho gave me advice on vegetables I should eat, increasing fiber intake, and not eating three big meals a day, but six smaller meals spaced throughout the day. That’s easier for my body to handle the nutrition.

My main joy is my family and for us to be all together—my wife, my kids and my five grandchildren. My wife, Franny, has been more than a support. I have so many medications I have to keep track of, and she keeps me on the straight and narrow. She is a lovely, lovely help.

I’m glad I went right in and took care of things right away, rather than waiting to see if my symptoms would go away. I’m very impressed with the care I have received at Overlake, and I have felt all along that I have been in the best hands. No traces of cancer have been found, and I am cancer-free as of my last CT scan.