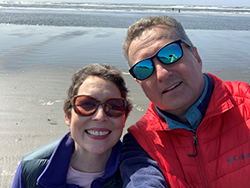 Kathryn Stuart Hammer, 54, knew she was at high risk for breast cancer. Her mother and sister both had the disease and recovered after treatment. “I knew it was a possibility for me some day,” says Kathryn, who’s married and the mother of two teenagers. But even so, Kathryn wasn’t especially concerned when in May 2020, a mammogram she had at the Overlake Cancer Center showed an area that needed more scrutiny. She was told that she would need a follow-up ultrasound. Kathryn still “thought it would be nothing.”

Within days of the ultrasound test, however, Kathryn was being scheduled for a biopsy, which would definitively say whether or not the suspicious area was cancer. The biopsy revealed that she had invasive breast cancer.

Kathryn met with Overlake breast surgeon April Phantana-angkool, MD, to discuss her options—a mastectomy in which the breast is surgically removed or a lumpectomy, which removes the cancerous area only. With Dr. Phantana-angkool’s expert guidance, Kathryn decided to have a lumpectomy. “I was comfortable with the decision,” says Kathryn. “No cancer was found in the lymph nodes, and I knew I would be carefully followed at Overlake.”

The lumpectomy was performed by Dr. Phantana-angkool, and Kathryn was able to go home the same day. Kathryn had an Oncotype DX test, which predicts the likely benefit of chemotherapy. The results showed that her risk of distant metastasis was high, and her medical oncologist, Jason Comer, MD, recommended she would benefit from chemotherapy in addition to endocrine therapy. Following completion of chemotherapy, she underwent radiation therapy with guidance from radiation oncologist Nicholas Serrano, MD, to lower the risk of recurrence.

“Going to Overlake meant it was easy to get the treatments and go home,” says Kathryn. “I was glad for the time I wasn’t traveling to and from appointments. It meant I could spend more time with my family.” Kathryn says she didn’t give up anything by staying close to home.

“My care at Overlake was comparable to major medical centers in the United States such as the University of Chicago, New York Hospital, Stanford, etc. I say this because of the cooperation between Overlake and Fred Hutchinson. Right in my neighborhood, I was able to benefit from the latest research, as well as an elite surgeon and optimal treatments. I am grateful.”