We are committed to the health and safety of our community. Please visit the following links for the latest COVID-19 information.
COVID-19 Information  |  Testing  |  Virtual Care  |  Visitor Notice 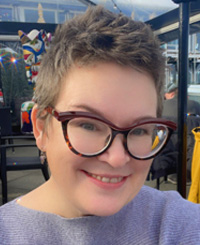 On a hot summer day last year, a fan’s breeze blew across Theresa Kirkmire’s face and caused such intense pain that she wanted to scream. Theresa, 50, had no warning that she would suddenly feel like she had been stuck by a “hot poker.”

A former teacher, Theresa is married with three adult children and is someone who has always been relatively healthy. Over the years, she and her family have lived in several foreign locations, including Australia and the Middle East, and she has always faced any challenge with confidence. But the sudden rush of pain she felt from the fan that day left her confused and frightened.

Emergency Room personnel and consultants at Overlake Medical Center worked intently to solve the mystery. An MRI revealed that Theresa was likely suffering from trigeminal neuralgia, a condition that affects the trigeminal nerve in the face and can cause intense pain. Some trigeminal neuralgia patients respond to medications, while others, like Theresa, require surgery.

In October 2021, Theresa underwent a microsurgical procedure performed by Eastside Neuroscience Institute neurosurgeon Amitoz Manhas, MD. He used an operating microscope and precise instruments to relieve pressure on the nerves in a very delicate procedure near the brainstem. The operation was a success, and Theresa healed quickly. She was soon well enough to travel to Portland to see her daughter.

“The pain was gone immediately,” says Theresa. “My husband noticed right away that I was better. I know I will be dealing with this condition for the rest of my life,” says Theresa, “but I’m confident in the care I’m getting through the Eastside Neuroscience Institute at Overlake.”

Theresa spent three days in the hospital at Overlake and is now regularly checked for a return of symptoms.

Theresa has also had the help of an online support group and says she wants anyone who has concerns about their health to “find the right place to get care and to get all your questions answered.” For her, that was the Eastside Neuroscience Institute and Overlake Medical Center.

Coping with the Loss of a Loved One